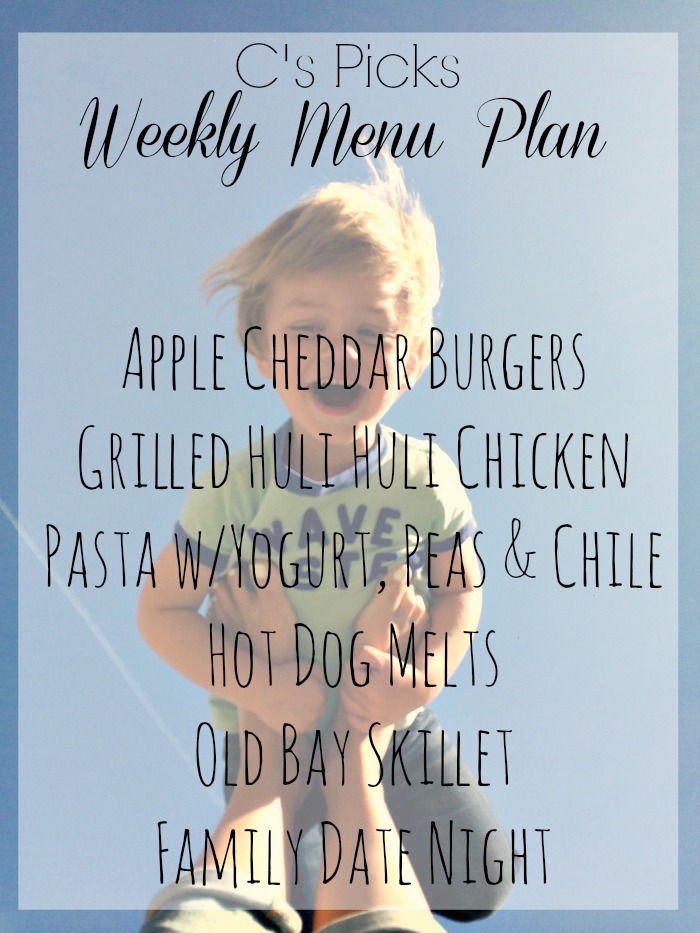 Alright, alight. Now this is some spring weather I can wrap my mind around. 60’s and 70’s, even stormy, is so much better than 40’s and 50’s. Let’s go full into spring mode with our food this week. Light, fresh – think of peas and asparagus as the stars. And some grilling, of course. Let’s do this!

On Sunday (happy birthday to my sister Talia!) we must grill. And you know what? Sometimes you just. need. a. burger. I can’t wait to try these apple cheddar turkey burgers. Swoon. Sweet potatoes on the side.

I’ve been meaning to try this grilled huli huli chicken recipe. Let’s get it going with some brown rice and grilled balsamic asparagus on Monday night.

Tuesday looks to be a good night for a lighter bowl of pasta. How beautiful does this one (from my neighbor!) look? Love the fresh peas. And hey, shhhh about the greek yogurt. Don’t tell M!

We’ll be on the baseball field Wednesday night, so we’ll come home to pop these already prepped hot dog melts in the oven for an oh so festive dinner. Go A’s!!!

After the hot dogs (wrapped in bacon – yikes), let’s go lighter for Thursday, shall we? This one ought to do the trick.

And that brings us to Friday. I’m dreaming of a family date night out on a patio. Let’s hope the weather cooperates.

What are you feeding your family this week? I’d love for you to share your menu plan with me in a comment below! And hey, stay tuned to ALFS because tomorrow we are partnering up with the darling Social Print Studio for a fantastic giveaway – yippee! 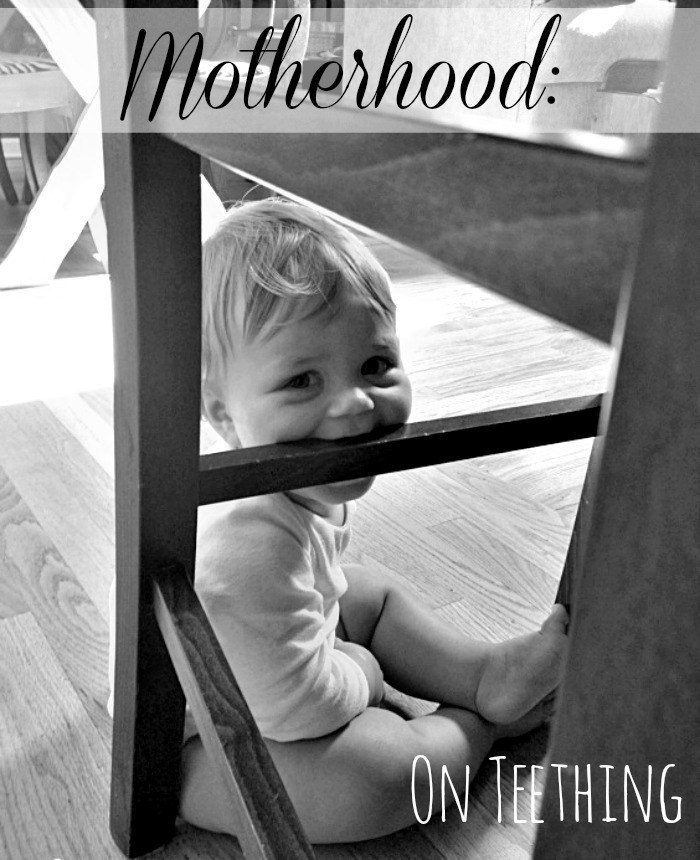 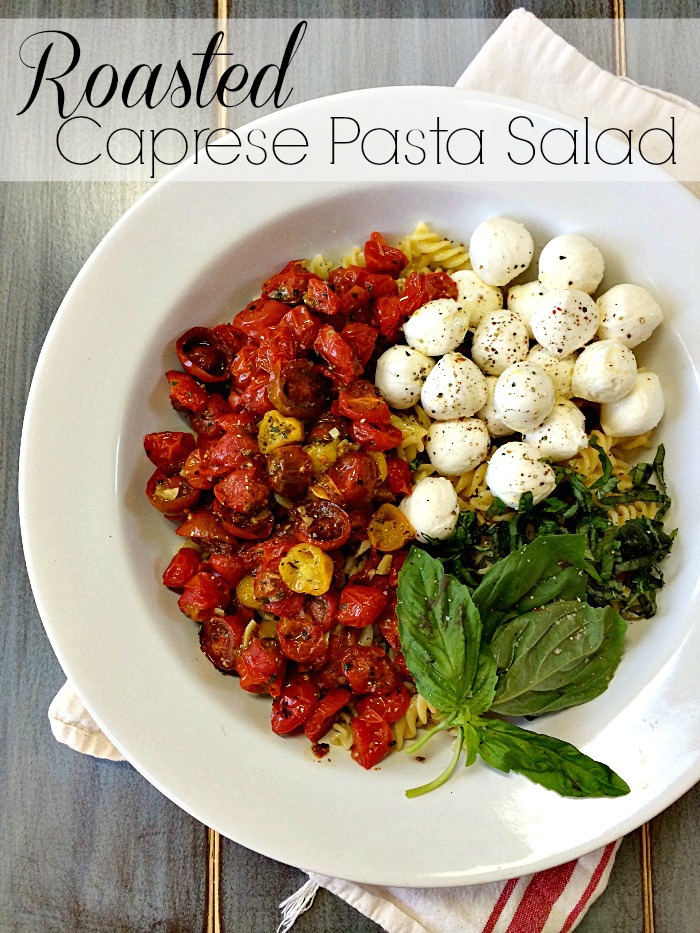 Is there anything better than fresh caprese in the summer? The sunshine-filled tomatoes almost melt into the fresh mozzarella, while the basil gives it that distinct summer punch. It’s the quintessential summer dish that is oh so missed during the long winter months.

Look, tomatoes outside of summer can be pretty, um, bland. Roasted up with some olive oil, garlic, oregano, dab of honey, salt & pepper? Well, you’ve got yourself some pretty darn good flavors going on.

Toss the whole tray of roasted tomatoes, juices included, with some fresh pasta, mozzarella, and basil, and what you’re left with is this roasted caprese pasta salad, a very pretty and delicious meal. Huge bonus that can be enjoyed in the dead of winter… or summer! 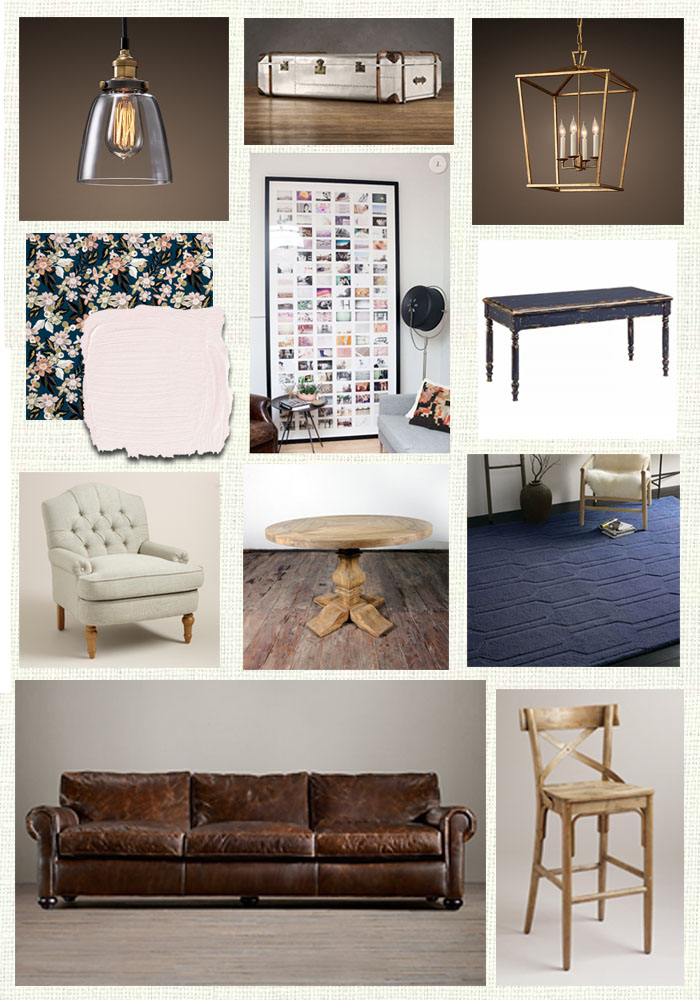 Can I admit something to you?

I’ve been a bit nervous lately.

See, if you aren’t caught up around here, we are expanding our family room and kitchen, which includes gutting both rooms as well as redoing the entire first level flooring in a wide plank wood.

And there are so many decisions to be made. Like, thousands and thousands of dollars of big decisions. And in general, I’m the one making them. And hey, I know, I’ve totally played the confident design gal before, making what I hoped would be effective and timeless decisions for our (dream) home. But this? This is… big. A bit over my head, I feel.

I’m often second guessing myself. So much to the point that the crates and crates of wood arriving this week leave a pit in my stomach. What if it’s not the right shade? What if the widths I chose look dumb in our home? What if, what if. But there is no turning back now. Those planks have been cut and stained and weathered just for us and they are coming whether we’re ready or not.

But there is some time to dwell and obsess over the family room. So I put together a little inspiration board, some of these items we currently own and have to work into the room (i.e. no way can we afford all new furniture), and some are new. I’d love your take on how you feel it blends together.

Things are staying a bit rustic and masculine with the leather and navy, but I hope the fabric and soft paint color (read: almost pale pink) give the room a feminine feel as well. I’m trying to balance out the two extremes here. I may live in boy world, but I’m going to have some girliness!

And hey, how killer is the artwork? I just received our family posters and I can not wait to get them framed. Stay tuned for more on that project, all thanks to Social Print Studio. Love.

So what do you think? Is the look cohesive enough? Is it us? I would so appreciate any input to help calm the nerves, just a bit. Thank you, thank you. 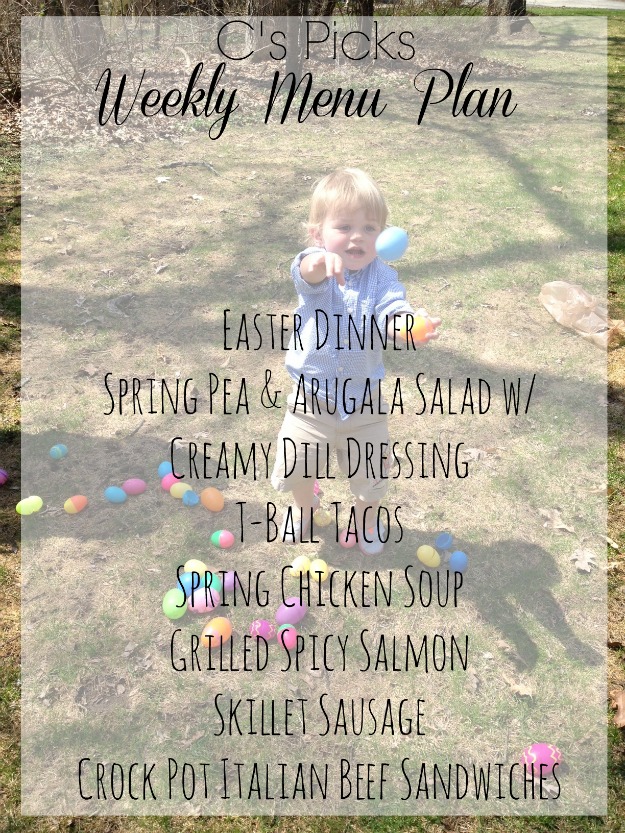 Happy Easter everyone! Hope everyone has a wonderful day celebrating today.

Unfortunately the upcoming weather seems to be stuck in that gross April rut, so this week will be all about comforting but lighter spring food. Let’s do this!

Since today is Easter, we will be dining on the traditional honey baked ham, cheese potatoes, and other lovely dishes my mom makes from scratch. I’m in charge of a salad and I think this one looks oh so beautiful for spring.

On Monday night we have an evening baseball practice, so that means a quick dinner around here. What’s more fitting than t-ball tacos? We gobble these up and hey, did you know I typically serve mine over mixed greens? A healthier twist because you know, swimsuit season.

As soon as I saw the dreary forecast for this week I knew this Spring Chicken soup had to be on the menu for Tuesday. Obsessed.

On Wednesday M is off to Connecticut, so I’m thinking my go to grilled salmon, veggies, and brown rice.

I love love love this one-skillet dish. And gosh I so need to update that photo. It’s so much better than it looks. It’ll be on the table by the time M lands on Thursday.

And that brings us to Friday. Let’s get something good cooking away all day long. My mom made crock pot Italian roast beef sandwiches last week, and I was drooling at the thought. Let’s give these Italian beef sandwiches a go.

This is what’s on our agenda for the next few days. What’s cooking in your kitchen this week?