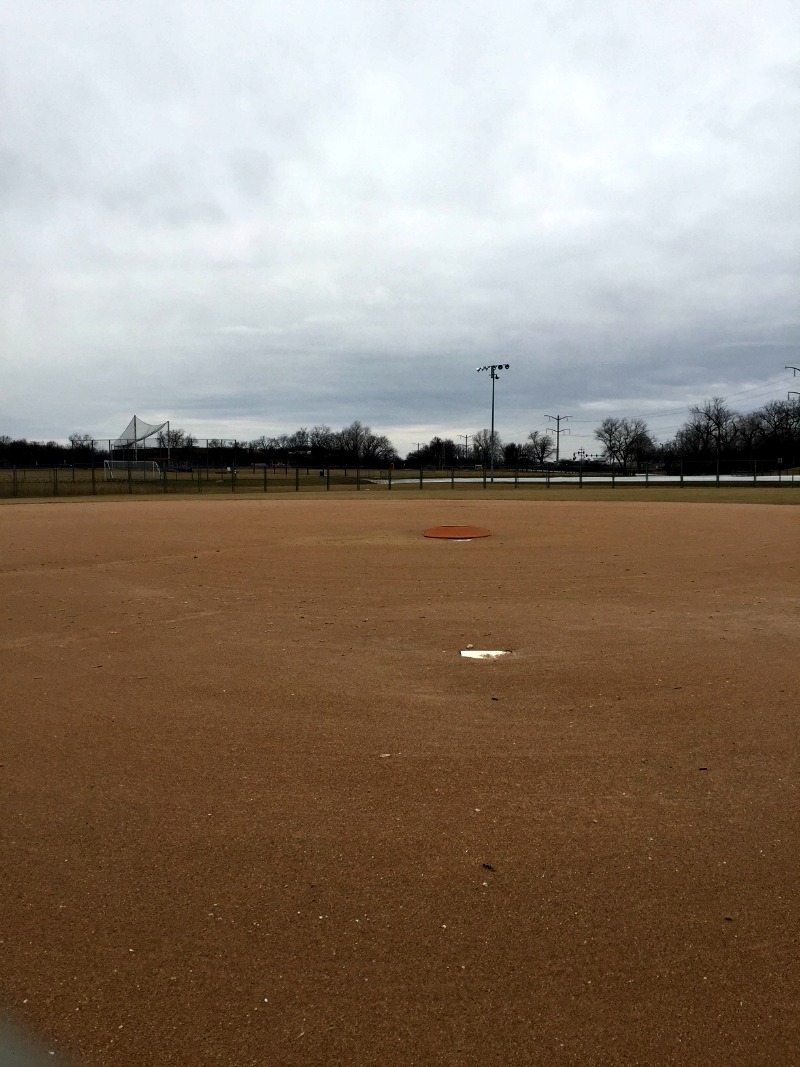 Alright friends. The month of April is upon us and for our family that means one thing. We have a lot of baseball ahead of us. Logan’s travel team has been practicing indoor all winter long and it’s now time to take this game outside. Well, if the weather allows. My goodness where did spring go. It’s tragic, really.

Aside from many many indoor practices, another part of prepping for the season is of course, the uniforms. It’s like Christmas morning when the boys receive them and they then proceed to live in their new hat and hoodie until it’s practically rags. It was such a surprise this year when we went to get fitted for them and saw the boys will be wearing white baseball pants. White. I can barely wear white pants without getting dirty and I am a 36 year old tidy woman.

Last week I threw out on my Instagram stories how ridiculous it was that young boys would be dressed in white baseball pants and oh my goodness did it get the conversation going. I love when stuff like this happens and it’s always so interesting to me what gets the mom blood boiling. It’s really nice knowing I’m not alone in my thoughts. If you recall, we had quite the chit chat about the school drop off and pick up procedure. That was one of my most read posts, ever. And now we are moving along to another much debated topic: white baseball pants. Can we form an alliance? MAWBP. Moms against white baseball pants. I’m totally feeling it.

For the love of the good Lord. WHO on earth decides this? Never mind. Obviously not the person actually dealing with and washing the white pants. Like I do so often, I really tried to think outside my own brain and into what the person could be thinking. Were they cheaper? It could not have been by that much and dude, I will pay. Big money. The other idea I came up with is that this person would like to torture mothers. That, or they just haven’t a clue the great impact on my life their decision caused. (I’m really guessing it’s this one). Let’s discuss. 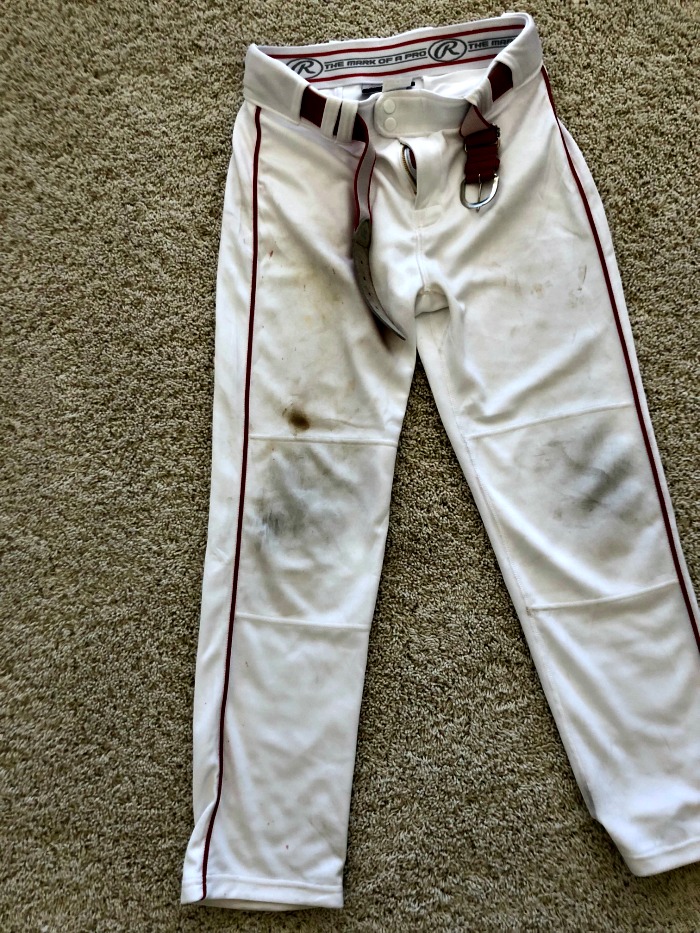 These are Logan’s (brand new) baseball pants after he wore them once. TO PICTURE DAY. He didn’t. even. play. a. game. in. them. Can we just pause for a moment and think about that? Really, think about it. When I asked him what on earth happened he replies ‘oh, after pictures we went to Meatheads for dinner. And I ran through some bushes.’

Awesome. Of course he did. Because that is what eleven year old boys do. (It still baffles me that we can never just walk from the car into a building. We must always jump over something, run through something, and most of the time, fall over).

Back to the messy (now ketchup stained) pants. So immediately on my Instagram messages tips started rolling in. You can power wash them! I get a special soap! I get a special bar! I soak them in two stages in different buckets and then wash them!

While all the messages are so lovely and appreciated you guuuuuuuuys I don’t want to do any of that. I do enough laundry as it is and coming up with a special routine and system for white baseball pants can not be my actual life.

Let’s think about this. Logan plays roughly forty five baseball games during his travel season (and yes, OK, he has two pairs of pants). But two pairs aside, I am not going to POWER WASH baseball pants in my driveway for that many games. I don’t want to be the mom that owns a power washer. That is not something  I dreamed of as a child and it’s just not going to be what I have become. I don’t know what my exact plan is yet but I can tell you that it is most definitely not that.

Hey look, I get it. White baseball pants are kind of cool. I love white! And they look sharp. ON ANTHONY RIZZO. Because he has a personal uniform manager. He’s not coming home after playing all muddy yelling ‘moooooooooooom I need my uniform washed for my 7AM tournament game (that is an hour away) tomorrow morning!!! Moooooooommmmm!!!!’

Can you understand my pain here?

There is a time and a place for white baseball pants. Kris Bryant also comes to mind. I’m just saying.  Nine, ten, eleven, twelve, thirteen and heck, even fourteen year old boys do not. 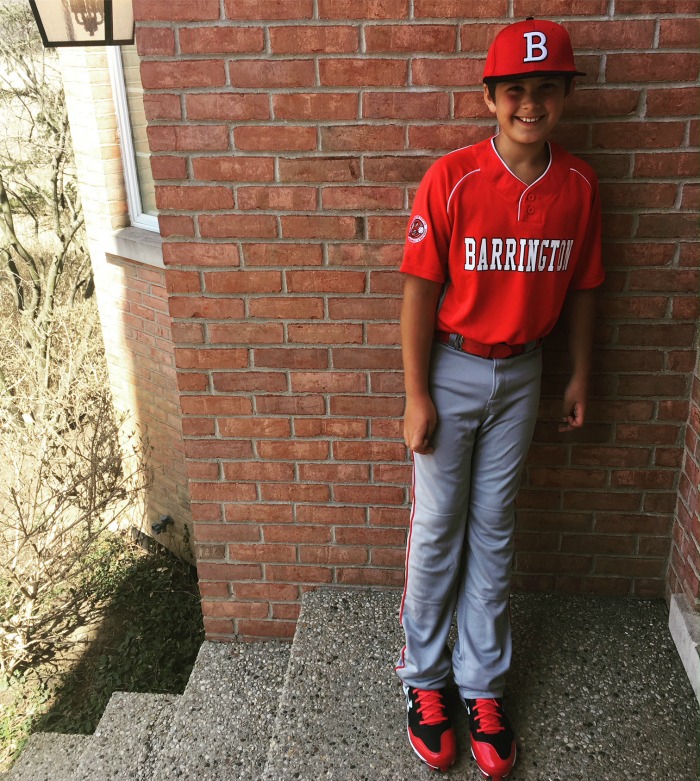 The solution? I recommend gray. We have worn gray the last two years and have looked sharp as a tac. And yes of course they still get dirty, but it’s a much less obvious dirty/the pressure on mom isn’t as intense. I feel like if you have the kid on the field who’s white pants are always dirty you automatically think ‘that mom has got to get her life together.’ It’s like a signal of neglect.

And I don’t neglect my boys. Really, most of the time I don’t! We are clean(ish) and fed and on time and current with all vaccinations. They are thriving functional human children. Who just happen to have a mother that doesn’t want to deal with white baseball pants.

Who’s with me? MAWBP. Let’s make it a thing.