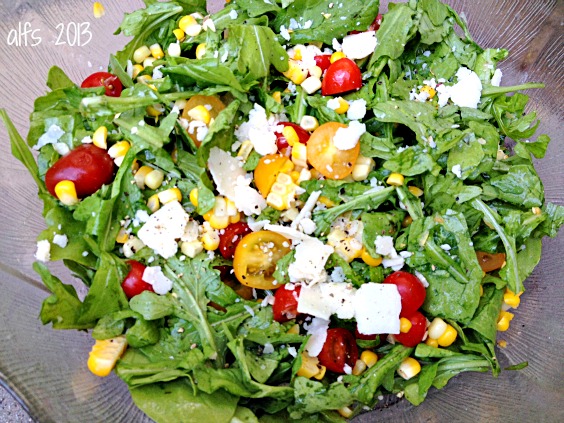 I feel like it’s time to take a step back from all the grilling posts around here. It’s been all charcoal charcoal charcoal so there is no better time to debut a new fresh summer salad that sits perfectly along side your grilled meat.

We start with arugula, which I recently discovered I seem to have a slight obsession for as I use it quite often. Kind of like mason jars and linen. Really, it’s a problem. We are working on redoing our entryway and the paint color I picked was called ‘linen white.’ Perfect. Well, until we discovered that it was the color already painted on the walls. Huh. M called me while I was playing chauffeur and asked if they should just go one shade darker and I literally panicked. NO! Then it doesn’t have the word linen in it! (L stop smothering your brother!) It has to be linen! I then raced home, jumped online, and began searching for another benjamin moore linen paint color. As I hunched over my laptop M kept repeating ‘I don’t understand why you can’t just pick a color you love as opposed to a color with the word linen in it.’ BECAUSE! The color that has the word linen in it is the color I will love! Gosh, it’s so obvious. And I was right – natural linen is sitting perfectly on our freshly painted walls. Crisis avoided.

Wow, I can’t seem to recall why exactly I just went off on a tangent like that. Obsessions will do that to you, I suppose. They can be a bit consuming.

Back to my other one – arugula. It’s just that perfect green. Not bland, at all, so it doesn’t need much else to make it interesting. If you feel the same way about this peppery green, here are some other recipes that incorporate it well:

And then there’s this salad. It just sort of came together on its own last week. I had fresh corn and tomatoes I wanted to use up so thought it would all blend nicely with a cilantro lime vinaigrette. Topping it with freshly shaved parmesan took it to a whole new level.

How to make this one? Well, easy. Shake up this vinaigrette, in a mason jar, obviously. And pour over your arugula, 2 ears of grilled corn (cut from the cob) and a good handful of cherry tomatoes. Toss gently and top with freshly shaved parm.