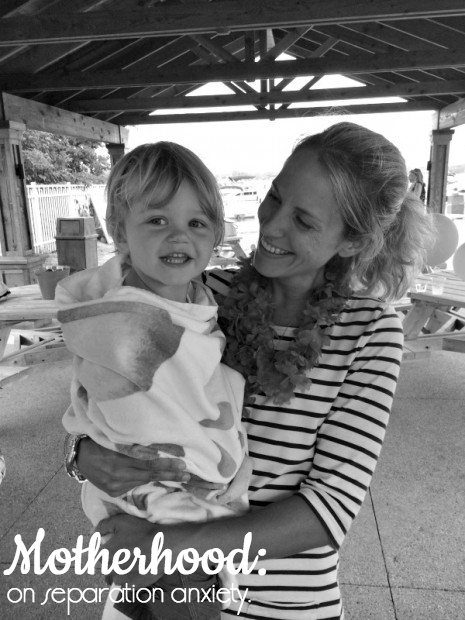 Leaving B. The thought can send me into a panic, sweaty palms and all. What happened to me? I didn’t used to be like this. I was one of those cool as a cuc moms that would pick up and drop off her baby, toddler, kid with ease. Little to no tears on either end, L would run into whatever place he was left, eager to explore as I headed off to the office.

I think it makes a different type of kid, at least in my experience it has. I’ve also been a different type of mom. My sole job is to tend to him, raise him, make sure he is happy, healthy, fed, napped, clean. I’m doing it all, almost all the time, 24/7. A bit of a co-dependency forms. B wants mom and I want to be the one “momming” him. I do it the best, in my mind.

Recently two big things happened that rocked our little world. First, B began a two’s class at a nearby preschool. I could not have been more excited for it to begin, for many reasons. The most being to give B the experience of interacting with kids his age in a setting outside of the home. I felt so often he was just, well, bored of me. Most of our days were spent with him asking when L, Ryder, and ‘Memo‘ would be home. I get it B, they are a lot more fun.

Fast forward to his first date of school. I felt a deep and utter sense of complete nerves. A huge knot in my stomach; I was even nauseous. What was going on? I was finally going to have 2.25 hours of freedom and all I could think about was that I wanted to keep him home. I felt like I was leaving them my… baby.

Dropping him off was awful, as was expected. This was a huge step for us! I anxiously waited the 20 minutes it took for him to stop crying in the nearby foyer and reluctantly left the school to go walk it out with a great friend. All I wanted to do was go back but I knew this is what he needed. It’s what I needed. Baby steps here.

A few weeks in now, we still have tears but they are much shorter and fewer and farther between. He’s a very young 2 and I knew this would be challenge for him. I guess what surprised me was the challenge it was for me as a mom. I keep telling myself that only I will remember how hard this felt, the likelihood of him remembering is slim to none. We aren’t doing any permanent damage here (hopefully).

Just when we were getting into a little groove here, suddenly I had a 5 day trip to California planned. With B’s separation anxiety kicked into even an higher gear with school starting, I had thoughts of staying behind. I just couldn’t leave him. Yet I knew it wasn’t an option – I would go, but a very big piece of me wanted to stay behind. I wanted to keep helping him with this whole transition of school.

So, I did what every logical mother would do and called the pediatrician (I’m being sarcastic here, I probably should have been calling a psychiatrist to get my head examined). I told him of my nerves and fears and angst over leaving B for so long and his response was just what I needed to hear.

“Courtney, go. I actually would judge you if you didn’t go.”

Thank you. He was so right! I just needed someone other than M – a friend – family – to say it to me.

And you know what? When I got back it’s like I had never left. B was happy, thriving, and within the first moments of seeing me in the early morning when he woke up he said “I love you.”  And then he proceeded with his little evil laugh that he knows always makes me chuckle hard.

We were together again.  A new sense of relief has formed, I think he and I both feel it. We can be apart and it all will be fine. In fact, it will be great.

Tell me, have you gone through similar feelings with your little one? I’d love to hear your experience!