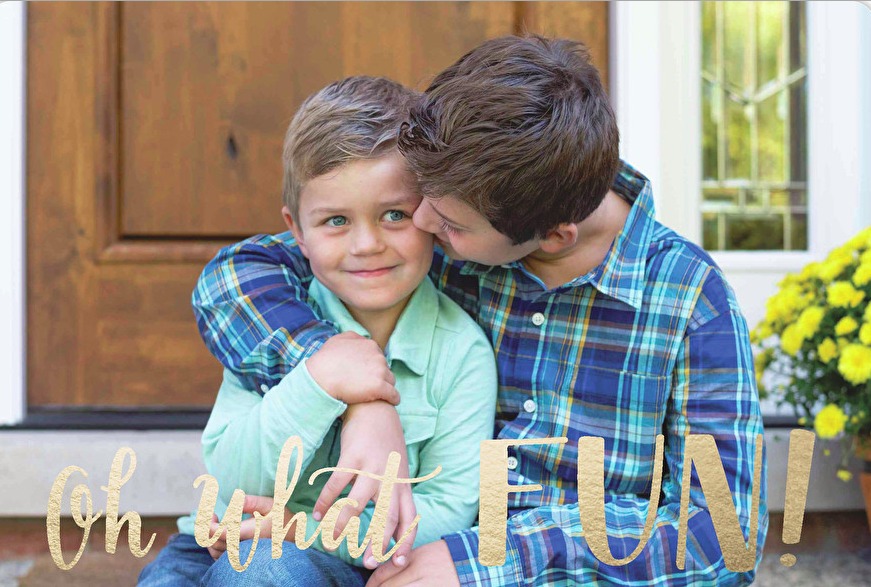 It’s come to be that time of year again. Time to bid my end of the year farewell, unplug for a bit, enjoy the holiday and all that it brings to return refreshed and ready to cook and write in January.

2016 was quite the year. After getting through the troubling month of January the word that comes to mind over and over and over again is FUN! (Hence the choice of card this year from the oh so darling Minted). Trips to Florida and Montana and California. Baseball games, football games. My sister got MARRIED! Oh and we sold a house. And moved.

That was never lost on me. Was it crazy and chaotic at times? Heck yes. I still whole heartedly think I’m still recovering from this summer (lesson learned: maybe one or two camps may be appropriate for the boys next summer instead of being their daily counselor). But it was all SO FUN and even as I write this I’m thinking eh – who needs camps? Let’s invite the whole baseball team over and PLAY!

That was the best part, really.

The playing. Seeing the kids in the new yard. It’s all we ever really wanted….to be that house. That house you can entertain a dozen families no problem. And boy did we ever. It has been non stop flurry of entertaining since the day we moved in. Chicken shawarma in the oven. Boys in the yard. Grilled peach and prosciutto pizzas on the grill. Boys on the four wheelers. Black bean soup before football games and neighbors running back and forth and beef bourguignon once the weather turned.

And that’s the secret to winter, you know. This beef bourguignon. Make it in a huge pot, throw it in the oven on warm, invite over great friends and open a good bottle of red. Fire on the side.

So 2016? You started off rocky but boy did you end on a high note. I still can’t believe we ended up where we did. I can’t think of a single thing I need under the tree this year. I wish you all a season comfort, joy, and most importantly – health!

P.S. Want more ALFS? I’ll still be cooking and goofing around on Instagram throughout the break. Search @alifefromscratch if you want to follow us along!