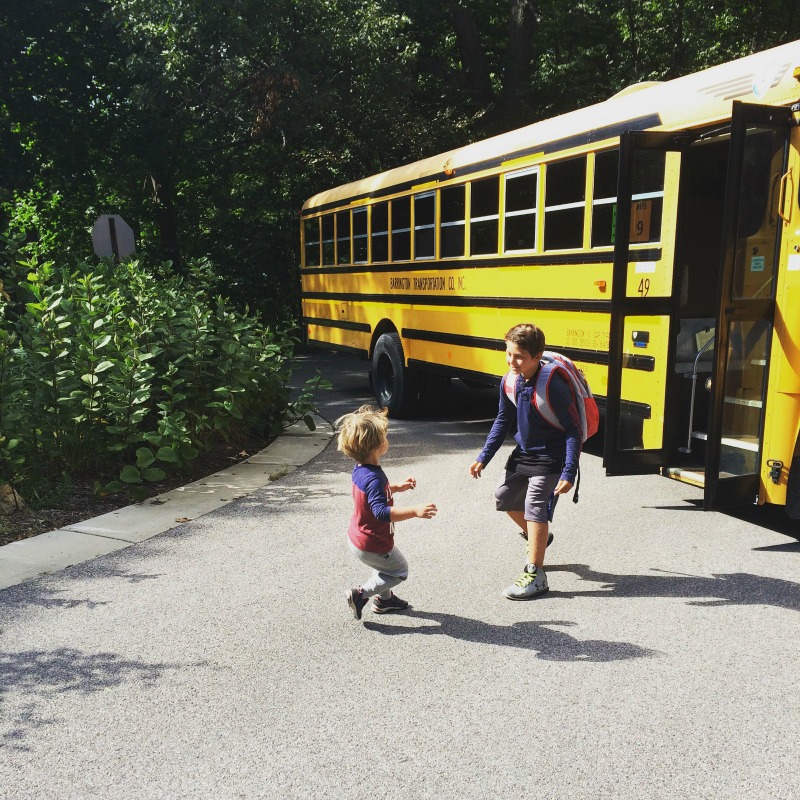 And just like that, I have two very independent grown boys that will be gone from my side for seven hours of the day. One fifth grader, AKA the big man on campus. And then my little B, just starting on his elementary journey in Kindergarten. This is the one and only year these two will be together in the same school. Part of me can’t believe this moment is happening, and another part is so ready and excited for this next stage of mothering.

As the busses start to whiz by so do all the memories. Logan’s first half day of Kindergarten, the small bus pulling into our driveway to carefully pick him up, still dressed in Crewcuts and wild hair. Little B was in my arms, barely three weeks old. Logan was the epitome of ready. First born, independent, so into his next adventure. Three hours later he was dropped back off, happy as a clam, and asking about his baby brother. ‘Did he miss me mom?’ We went on a long (slow) walk and he told me about his teacher, Mr. Gapp, who he still to this day claims should be in the ‘teachers hall of fame.’

The years rolled on and the school days revolved around my little buddy Beckett. We developed a very set routine of our morning and afternoon bus walks to pick up our Logan. B went from sling to stroller to insisting he walked, which of course meant we had to leave for pick up thirty minutes prior to arrival because every single step involved something new and interesting to look. That, or he would fall down. Again. Oh and let’s not forget the John Deere tractor, a classic for our neighborhood streets. B would drive that thing as fast as it could go to his brother, while neighbors walking by couldn’t help but smile.

There were the bus stop bee stings (three times, weird), and Friday candy days, and the occasional abandonment of a sleeping Beckett at home in his crib (it’s fiiiiiiine) to quickly grab L, and the days he got off the bus and I knew something instantly was wrong (mom, you might be getting a call that I de pants someone at school. Might.), and the days he got off the bus and something was just so right (mom, I got the highest score in my class on my math test!), and collecting all the sticks and rocks and bugs and mushrooms and flowers on our walk home, and the waiting in Grandview pick up line when he got too cool for the bus ride home. (Beckett peeing into a water bottle in the back seat because he had to go so bad that he was going to die. Again).

Yet through it all, I had my sidekick. And even when Beckett reached the preschool ready age and started his own little thing, we still had our time. Our lunch dates. Our afternoons. Dropping off and picking up Logan together. Beckett was right there, and more often than not directly on my hip or wrapped around a leg. It never occurred to me how fast time would go that he would, slowly, begin to let go.

But here we are. He’s still a bit scared of change and hesitant for a new routine but ready (I think) to get on that bus with his friends. Ready to finally have his ‘big kid’ moment. All I can hope is that the last five years I’ve had with him have given him a great sense of security and confidence to carry him through on his own. Well, not exactly his own. I think he knows half the fifth grade, a great position to be in. Thank you Logan.

So where does that leave mom. I recall a few years back when I was chatting with a mom who finally sent her youngest off to kindergarten and something she said stuck with me. She said basically that her hours on the clock just shifted. With little ones, obviously you have them all day everyday. But generally speaking in the evening you sort of wind things down, have (one) dinner, watch some TV, early bath and then bed. With the older ones though – you are on the clock right at pick up and things are go go go from there. First dinner. Homework. Play. Activities. Sports. Second dinner. Shower. And finally, a much later bed. And if you have the big age gap like I do, you’ve been doing both the much ‘earlier’ shift and into the evening ‘later’ shift. It will be a nice change of pace to have that earlier one off the clock.

So the big question: what am I going to do with all my time? Well, I’ll probably stick to the same formula for any time I have free time I’ve been given. 80% of it is family devoted (think cleaning, cooking, organizing, paying bills, errands, laundry, all that lovely stuff) and 20% will be for mom. With my longer span of time ‘off’ though, that 20% will get to be a pretty nice chunk of time. Maybe I will take an Orange Theory class (Kelly? Maggie?). I know I will write for the blog much more. I want to organize my spice drawer and my master linen closet and my gift wrapping….all projects I hope to share on the blog for anyone in need of some inspiration. Oh, and I also want to tackle my own closet! I need to seriously rethink things in there. I have way too much stuff….items I love but never wear. There has to be a better solution. Leaning towards the capsule idea but not as severe. We shall see. Oh, and I’m going to sit. Outside. On my patio. And read. Amen.

So here’s to you Logan. Your last year as an elementary student. Just like your first day of Kindergarten, you could not be more ready and I am so happy for you that got the teacher you wanted. And little B. I’m going to miss you so much my heart may burst, but I am also so excited to see what you are going to do on your own. I’ll be waiting for you both, right on time at the bus stop.