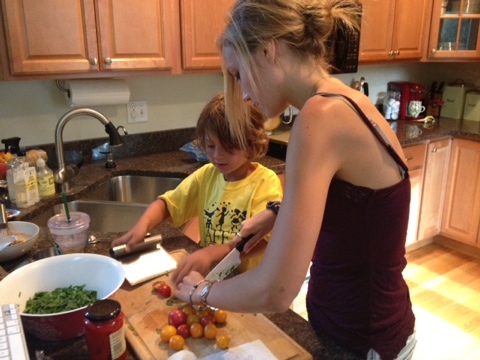 Meet two of my loves: one old, one new. My sister, Talia, and my new secret ingredient, smoked paprika.

I enjoyed both last night as T came over to cook and blog with me. Who is she exactly? Well, she is my (much) younger sister who also shares a deep love of cooking and writing. Isn’t she a doll? She wants to go into journalism and currently has an internship at a very cool magazine in the north shore area of Chicago called Make It Better. She has featured a yummy summer recipe at the magazine from A Life From Scratch, found here! You might see her a bit more around my kitchen as well as her own as I’ve asked her to incorporate some of her amazing writing and cooking here at A Life.

Back to last night. We decided to make a very delicious recipe my talented mom discovered last week from Giada. We adapted it a bit here and there but stuck with the basics. I believe the winning ingredient in this recipe is the smoked paprika. I have never cooked with it before but now that I have I wonder why more recipes don’t feature this amazing flavor. It turns dull into ‘what is that’ almost instantly. If you don’t have it stocked in your kitchen, grab some next time you’re out.

We also had a special sous chef, L, who piped up from the couch that he wanted to help cook. He quickly labeled the spinach as the ‘hairy green stuff’ and enjoyed learning to toss the salad together gently as to not crush the tender heirloom tomatoes and feta cheese, two other stand out ingredients.

If you’re looking for a great lunch for the girls or a perfect side to sit along some grilled meat, you can’t lose with this one. 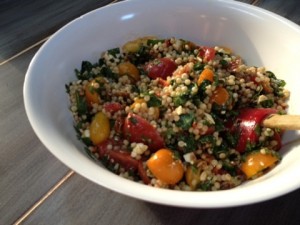 Write a review
Save Recipe
Print
Dressing
Salad
Instructions
By Giada
A Life From Scratch. https://a-life-from-scratch.com/ 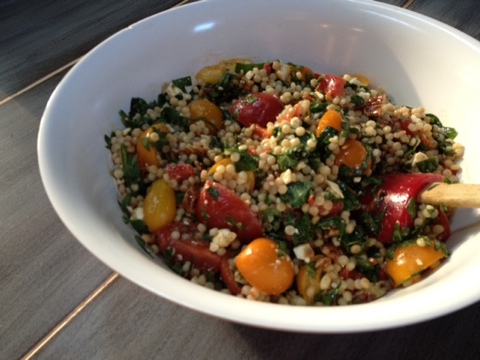 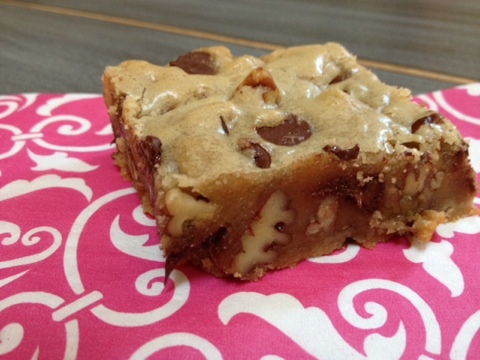 I did not grow up eating blondies so really had little clue what I was getting into when I set out to bake them one lazy afternoon. To say I was impressed would be a slight understatement…where have these been all my life???

I immediately turned to my mother. It’s just too easy to blame a parent, isn’t it? In her defense she never had a great recipe that used chocolate chips so all she was ever left with was a plain ol’ bar – no chocolate or texture from added ingredients. Ok mom, I’ll let this one slide but I do think I was a bit neglected here.

So what are these things? Blondies came from a southern chef who insisted on using only brown sugar in his baking as opposed to white granulated sugar. What this yielded was a chewy, moist, butterscotchy dream – also known as the blondie or the baked good that completes my life.

There are a million things you can do with them. Change up the chocolate chips (use white, or peanut butter). Change up the nuts (use pecans, or walnuts). Add in dried fruit – coconut, stir in some peanut butter. Feeling wild? Throw in a 1/4 cup of bourbon – most blondie recipes call for it! This is from the south people.

Since I’m in a very traditional home I knew if I were to be introducing a new baked item to the repertoire it would need to be as classic as it comes. I want to avoid the face M would make if he took a bite of something that god forbid had coconut or fruit hidden throughout – it’s just not worth it.

So, we went with the standard chocolate chips and a small amount of roasted and salted pecans. The verdict is still out there from M…hopefully he’ll make it home in time before the pan disappears. It’s 50/50. 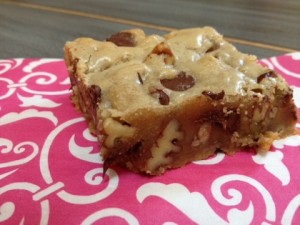 If you were deprived like I was and have never made these, I suggest you get going on this.
Courtney 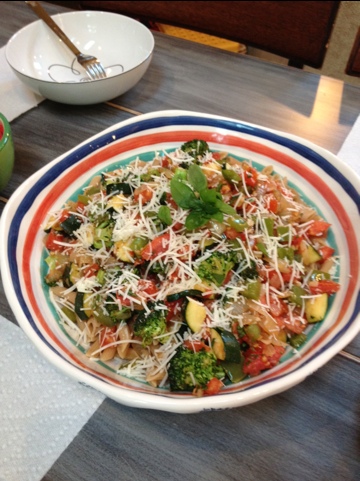 This past week M traveled to NY so I had the opportunity to have my sisters over for a girls night in. I love these nights because I can selfishly cook a veggie heavy meal that doesn’t revolve around meat and I knew exactly what that meal would be.

I grew up eating a great veggie pasta dish from my mom and I have developed it a bit over the years and named it ‘farmers market pasta.’ Almost all of the ingredients are available at your favorite farmers market or farm stand. The freshness of the veggies and herbs is out of this world! This is one of those recipes that is made for summer time fun.

Somehow my timing was off on M’s trip and he ended up joining us for dinner – a glitch that was quickly fixed with a stop to the butcher for some italian sausage to serve along the side. Heaven forbid a hunk of meat wasn’t on the table. 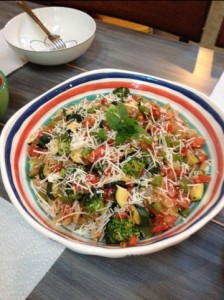 Serves 4
Write a review
Save Recipe
Print
Ingredients
Instructions
By my mom
A Life From Scratch. https://a-life-from-scratch.com/

Try to only have one bowl…
Courtney 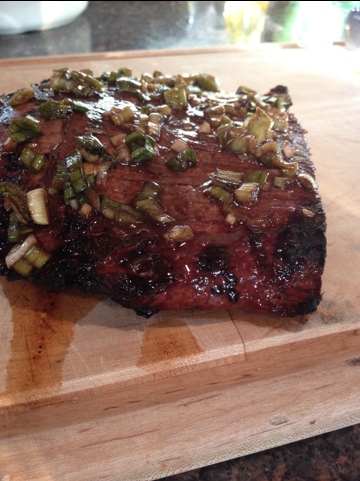 It’s been a whirlwind of a few weeks or so in our household. I think M counted he’s been in 8 different states in the past 2.5 weeks and he leaves yet again this week. L has been to two family reunions and a mini getaway for the 4th. Needless to say today was all about laundry.

Last night was our first meal at home together in quite awhile and I was so excited to have my traveling carnies around. Seeing how it wasn’t a zillion degrees out we knew two things had to happen. 1. Grilling and 2. Sitting on the patio. We got them both in and our evening was complete.

On the menu? Flank steak. A dish that has always been OK in my book. It’s not the first thing I’ll purchase at the butcher counter but if I’m at someones home and they are serving it I will typically enjoy it just fine. I feel the trick is all in the marinade and I had yet to find my perfect match.

Hello soulmate. These ingredients came together perfectly and penetrated the meat so you tasted the flavor from the inside out. The most important part? Let it rest. Exactly ten minutes. Not nine, ten. There is something to be said for that and I feel my past mediocre take on flank steak was that I did not let it do just that. Sure it sat there for a few minutes but I didn’t give it what it needed to showcase it’s full potential.

So make this when your not absolutely starving because it takes a really strong will power to pull this puppy off the grill and just….let it be. 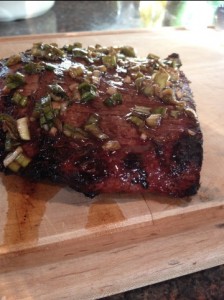 And of course….let it be.
Courtney